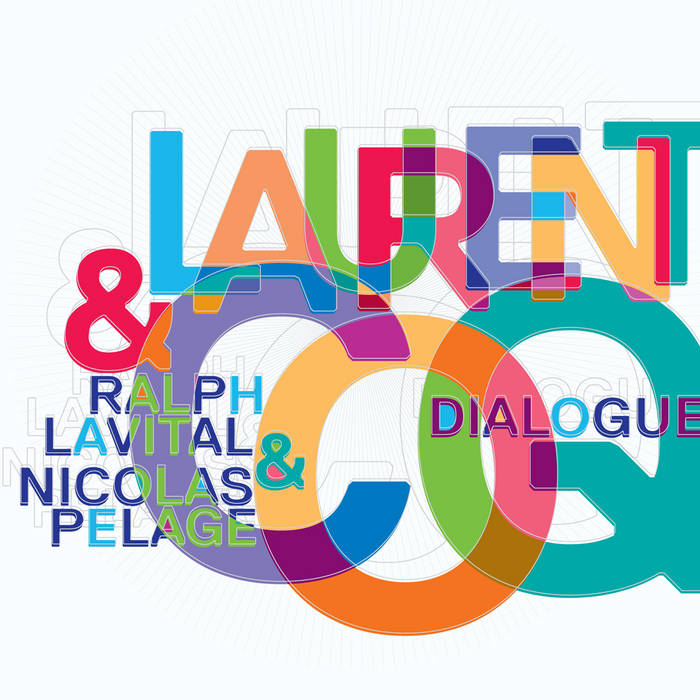 Jazz is music ever evolving. The term has come to encompass not only the legacy of the African American musical tradition rooted in New Orleans but also the amalgamation of sounds from all over the world blending with only the element of improvisation binding it together. In this vast sound world, progenitors like pianist/composer Laurent Coq are extremely valuable agents of change and good taste.

The French born Coq has been an important name in the world of jazz in both Europe and the United States for nearly two decades. His work has traversed the realm of the tradition yet continues to push boundaries. His latest recording – Dialogue – highlights Coq’s unique disposition as he echoes sonorities from jazz’s past while showcasing future talents and creating a unique blend of jazz and West Indian musical styles.

Coq has long been fascinated by the possibility and the challenges of performing piano alongside guitar, but the similarities in range, sound, and chording create numerous challenges. The legendary duos of pianist Bill Evans and guitarist Jim Hall are perfect examples of the beauty that can be achieved and stand as the standard as to what can be accomplished.

Coq found his guitar foil six years ago in a composition class he taught in Paris. Ralph Lavital comes from a family of musicians, including his guitarist/vocalist father, Tinou Lavital, with whom he would gig with at the tender age of 11. These late nights proved to be valuable experiences for Lavital as he learned standard musical repertory from his father’s native French West Indies, which the younger Lavital would eventually blend into his own distinctive jazz compositions.

Coq was not only struck by the young guitarist’s amazing playing ability and Wes Montgomery inflected tone, he was also intrigued by Lavital’s musical output. Coq was familiar with a similar style of playing which had emerged from the Guadelupean jazz pianist Alain Jean-Marie, who had been appropriating the rich harmonies and Biguine dance rhythms of traditional West Indian songs into jazz for three decades.

When the two finally began performing together, Coq wanted to continue their focus on blending jazz with the flavor of the Caribbean. There was an immediate rapport between the two musicians, as there has to be to combine their respective instruments.

After some time, the two decided that they should document their work together. An opportunity presented itself when Coq’s cousin, who hosts an artist’s retreat in the South of France, provided a rehearsal space and funds to record the project at Studio La Buissone, near the retreat. The duo had booked studio time and had written brand new material when Coq decided that he wanted to add a vocal element to the project.

The talented Martiniquean vocalist Nicolas Pelage had been a member of Lavital’s ensemble at the end of his term at school, where Coq had originally heard him and was impressed by his natural expression, reminiscent of the legendary Brazilian singers of the 1960s and 1970s.

The duo invited Pelage to write his own lyrics in Creole, his mother tongue, adding another dimension of universality to their music, as the language has been an extraordinary example of cultural blending, in this case, French and African languages. The group eventually added a number of compositions built around Pelage’s voice. Although the Caribbean influence is obvious on some tracks of the album, the goal was to take Creole out of its natural musical environment, and make it a suitable material for modern jazz.

The group coalesced with ease and recorded the album in two days. The subtle sound that they achieved was intimate yet inviting.

The uniting sound of Coq’s “Mwen Two Kontan” introduces the record with calypso inspired dance rhythms and uplifting vocals from Pelage. The buoyant “Carrousel” follows with a tricky 5/8 time signature requiring concentration and trust between Coq and Lavital to create a moving performance. The lilting ballad “Refuge” is a dedication to Coq’s mentor, pianist Bruce Barth. Its harmonic changes continually shift so the soloist never seems to play the same changes twice. Lavital’s “Mazouk Pitché” is named after the French West Indies mazurka and includes the traditional and softer B section, slowing the pace for dancers to get close.

The title track is a singular composition requiring both performers to pay attention to one another as they improvise together over a 4/4 A-section with chords moving every five 8th notes (especially difficult without the aid of a rhythm section). Coq’s affinity for trees led him to write “Tree Therapy,” a dramatic composition with complex rhythmic and harmonic concepts, making it an extremely challenging piece to perform, yet here it is breezily handled. Pelage returns on “Sa Ké Alé,” a ballad initially inspired by Bill Evans’ “Turn Out The Stars” recorded with Jim Hall, featuring inspiring lyrics about inner strength.

Named for a small village in Martinique where his mother was born, Lavital’s “Prêchotin” is another composition utilizing a West Indian musical tradition, specifically the Biguine rhythmic pattern. Coq’s jazz waltz “Souvenirs Ti Manmay” features lyrics written about childhood reminiscences by Pelage about his native Martinique. “Escalade” is separated into two parts, one in 3/2 and the other in 13/8, the first featuring a guitar solo leading to a unison on the melody before the duo jumps into the second section, trying to find different ways to play together, creating new and unique textures in their “less is more” dynamic. Lavital’s “Maurice” closes the recording with a lullaby penned for his mother, the written melody intertwined with improvisatory elements.

Dialogue continues Coq’s work with unique forms and textural elements. The collaboration with the extraordinarily talented guitarist Ralph Lavital and wonderful vocalist Nicolas Pelage is truly astounding and creates a marvelous blending of jazz with traditional French West Indian music and of written composition with improvisation.

Bandcamp Daily  your guide to the world of Bandcamp